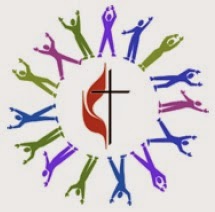 Laity Sunday focuses on the celebration of the ministry of all lay Christians. In many local churches, Laity Sunday is observed by having lay persons lead all parts of the worship service.
Our theme for Laity Sunday is "Engaging in Community Action." What does this theme mean to you? To me, it means taking the time to commit yourself to "doing"! It means to jump in and experience the energy of the people around you that are helping to make a difference in the lives of others.
The slide show of pictures that Burt put together for this Laity Sunday will show you the fun and camaraderie of people who are engaged in the church and in the community. There are so many ways to take action, and I hope you will be inspired! 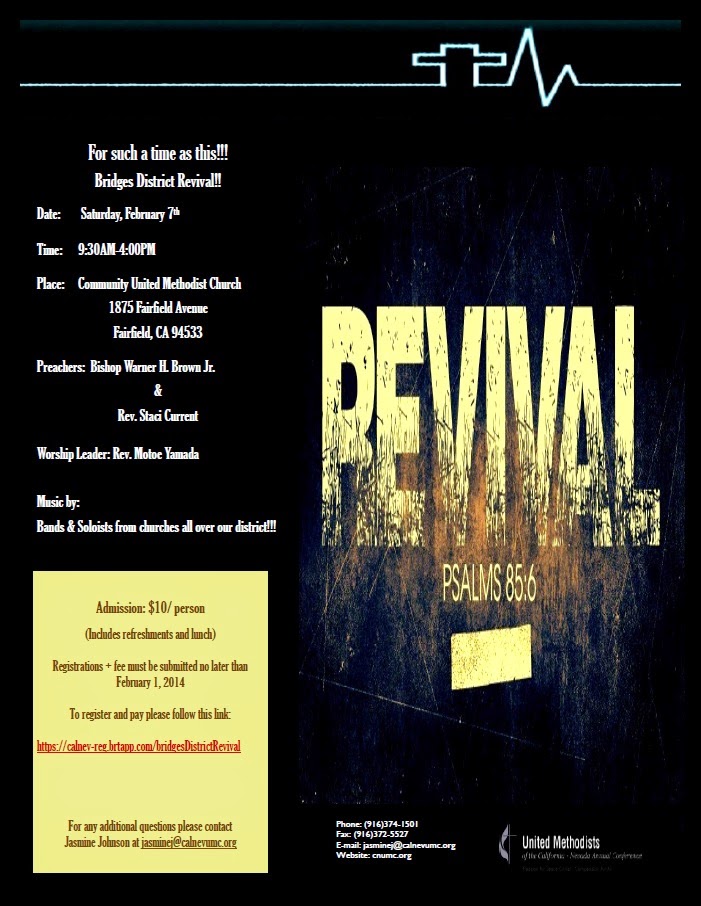 Come and claim the power of new life in our District! There was a time when we Methodists were actually criticized for our enthusiasm! It's time once to pick it up and lift it up and share our hopes and dreams for the life of the Gospel among us! No "program" or "institutional agenda!" Just Holy Spirit worship and opening our hearts to God's love! God is indeed doing a new thing in our District and our Conference! Come, worship, celebrate and receive the gift of Spirit, Worship, Fellowship and more! Learning and Dialogue Opportunities having to do with claiming new life and hope!
OFFERING: Special Offering for the Bridges District $100k Challenge for Imagine No Malaria!

Worst Day of My Life by Pastor Nancy Chang

3. __________ YOURSELF IN THE LORD
but David encouraged himself in the Lord his God. 7 And David said to Abiathar the priest, Ahimelech's son, I pray thee, bring me hither the ephod. 8 And David enquired at the Lord, saying, Shall I pursue after this troop?

4. __________ TO THE VOICE OF THE LORD AND __________.
And he answer him, Pursue: for thou shalt surely overtake them, and without fail recover all... 10 But David pursued, he and four hundred men: for two hundred abode behind, which were so faint that they could not go over the brook Besor.

5. YOU WILL __________ EVERYTHING AND MORE
18 And David recovered all that the Amalekites had carried away: and David rescued his two wives. 19 And there was nothing lacking to them, neither small nor great, neither sons nor daughters, neither spoil, nor any thing ........

6. __________ IS THE FINAL STEP
26 And when David came to Ziklag, he sent of the spoil unto the elders of Judah, even to his friends, saying, Behold a present for you of the spoil of the enemies of the Lord;
Posted by Chinese Community UMC at 11:00 AM
Email ThisBlogThis!Share to TwitterShare to FacebookShare to Pinterest


Posted by Chinese Community UMC at 11:00 AM
Email ThisBlogThis!Share to TwitterShare to FacebookShare to Pinterest


Holiday Greetings from our Covenant Missionaries

Dear partners, supporters, friends and families,
We appreciate very much your faithful prayers and your financial support to enable us serving God in reaching Cambodia for our Lord Jesus Christ.
We also appreciate so much for your partnership to serve our Lord Jesus Christ in sharing God's love and God's salvation to the people in Cambodia.
Please pray that God continues to bless Cambodian Christian people to glorify His name in this suffering land of Cambodia.
May your Holiday Season be blessed with Peace, Love and Joy.
Sending you our HEARTFELT wishes with Joy that never Ends...
A Merry Christmas and A Happy New Year!
Marilyn & Joseph Chan
Posted by Chinese Community UMC at 11:00 AM
Email ThisBlogThis!Share to TwitterShare to FacebookShare to Pinterest

Barbara Bate former staff member of the General Board of Discipleship.


Epiphany is an unfamiliar word to many of us -- even to many Christians. Here are some phrases that may help it to make more sense:
Why does this word "epiphany" matter in the church?
The time after Christmas is often a letdown within a secular, consumer-focused culture. But in the Christian "kin-dom," the story is different. Light expands into dark places. Newness appears in the midst of routine. Life bursts out of the expected deadness in the natural world.
Here is one example. It occurred in Zimbabwe, in the middle of July 1997. I was traveling to the rural village of Bindura to preach and lead a workshop for lay preachers in that area. After worship, I was able to visit a children's village called S.O.S. It is one of several places in Zimbabwe where orphaned
and "dumped" children (that is the word used by the African people there) are raised, schooled, and loved in small groups presided over by local house mothers. Most of those women are active United Methodists, and they bring the children from the S.O.S. house to worship each Sunday.
On the day of my arrival, I heard about a newborn infant who had been found in the weeds by a local police officer. He had heard her crying while he was walking home along the path outside the village. He took her to S.O.S. The women on the staff determined that the baby was probably four days old
and apparently unharmed. In the two weeks before I saw the baby, she had been fed, held, given a place to stay, and a name. The name she was given? Christina.

I watched her napping on one Sunday afternoon, and I realized that she was vulnerable and in one sense abandoned--perhaps by a mother whose family would not accept the presence of a child with an unnamed father. But Christina was also a gift -- to the community of people who were prepared to dedicate themselves to her well-being, to the pastor who supported the ongoing ministry of S.O.S., and even to this visitor from the United States who saw the power of God in her young life. She is a reminder that in the eyes of God, every child is sacred -- in Bethlehem, in Brooklyn, in Bindura.

Where are the epiphanies that are awaiting your attention? Watch and listen, and you will find them.
Posted by Chinese Community UMC at 11:00 AM
Email ThisBlogThis!Share to TwitterShare to FacebookShare to Pinterest
Newer Posts Older Posts Home
Subscribe to: Posts (Atom)

Email Me when this blog is updated!